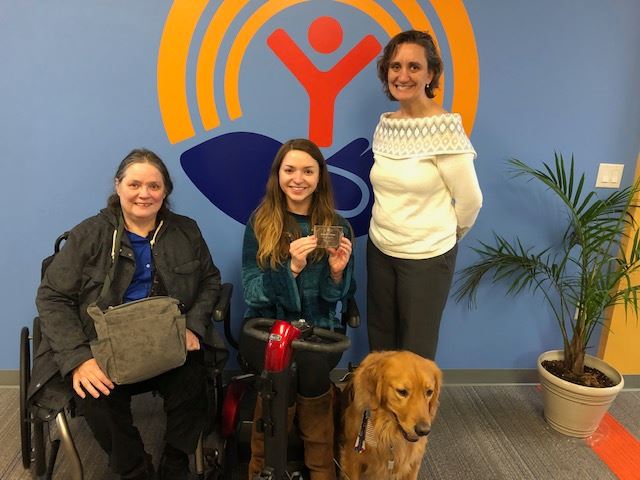 On Dec. 21, the Vermont Center for Independent Living honored a young Grand Isle woman who is striving to make the world a better place. Jacqueline Kelley received the Deborah Lisi-Baker Youth Leader Award.

The VCIL Board of Directors created the Deborah Lisi-Baker Youth Leader Award in 2006 in honor of the disability rights organization’s then-executive director and in honor of emerging leaders who are moving forward the promise of disability rights and the independent living movement. Lisi-Baker has spent much of her life advocating for the human and civil rights of people with disabilities and continues to do so. She served as VCIL’s executive director for many years until retiring in 2009.

Jacqueline Kelley was diagnosed with spinal muscular atrophy at the age of 2, a disorder characterized by the degeneration of motor neurons in the spinal cord. She has never let her disability slow her down and has always strived to educate her classmates about people with disabilities. Kelley’s leadership skills were apparent at a young age; for example, she was voted class president in the eighth grade. For high school, she attended Lyndon Institute as a boarding student, where she thrived despite the challenges that any young person faces when living away from home. She is currently a junior studying political science at Providence College in Rhode Island, where she has made the dean’s list. Kelley has been engaged on many levels during her time at Providence, including serving as an orientation leader and a student congress class representative. She was even hired as the college’s student ADA consultant.

VCIL Executive Director Sarah Launderville said, “This is one of my favorite awards we give because it highlights the leadership of young people in our movement. I’m pleased Jacquie’s studying political science as there is so much work to be done defending our rights as individuals with disabilities and we are excited to see where she goes with her leadership in the future.”

Jacqueline’s mother, Cari Kelley, said, “As her mother, she inspires me every single day. We have had many discussions over the years about living with a disability, and her vision is pretty amazing. She talks about how grateful she is to have the challenges she has because those are what have made her into the woman she is today. She likes who she is and looks forward to seeing how she will make a difference…as do I.”

If you would like to nominate someone for next year’s Deborah Lisi-Baker Youth Leader Award (the person must be 22 years old or younger), please contact Stefanie Monte at smonte@vcil.org or 802-224-1820. Be sure to tell her why you are making the nomination.