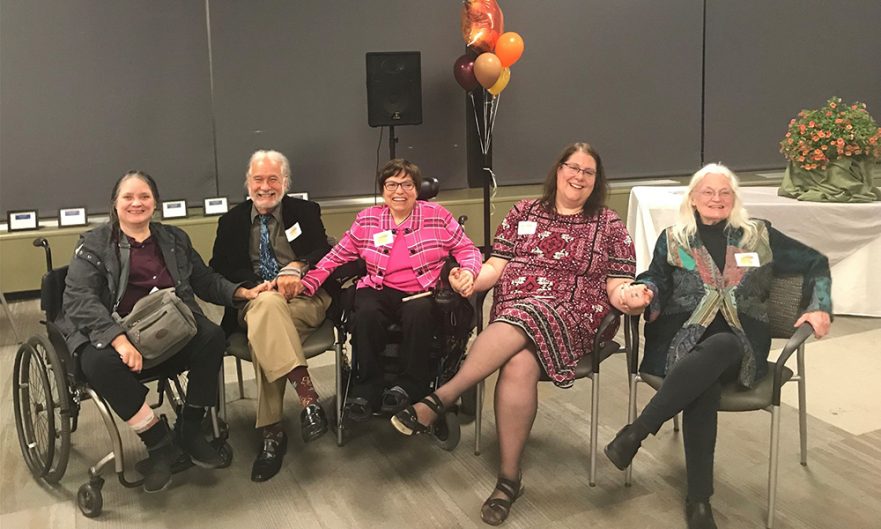 The Vermont Center for Independent Living, a statewide nonprofit organization, is celebrating 40 years of people with disabilities working together for dignity, independence and civil rights.

Like other independent living centers across the country, VCIL is committed to cross-disability services, the promotion of active citizenship and working with others to create services that support self-determination and full participation in community life.

The seed for VCIL was planted when a grassroots group of organizers conducted thousands of interviews with people with disabilities and found that there was a great need for a broad range of independent living information, resources and opportunities for Vermonters with disabilities. The result was the formation of the first cross-disability, self-help and social change organization run for and by individuals with disabilities in the state.

Deborah Lisi-Baker has spent much of her life advocating for the human and civil rights of people with disabilities. She served as VCIL’s executive director for many years until retiring in 2009. She summed up VCIL’s early days as a time when “a few visionary and rebellious activists incorporated an organization to change disability experience in Vermont. Many of the founders and those that followed began to go without sleep, write grants, crawl up stairs to visit peers, imagine accessible streets and buildings, write legislation, celebrate Deaf culture and Deaf rights, help people out of nursing homes, challenge psychiatric assumptions and learn how true stories can change the world.”

She added, “Thanks to all who started VCIL and to all who continue the revolution today.”

VCIL Executive Director Sarah Launderville said, “We are committed to continuing that legacy of hope and independence! I’m so proud to be part of an organization that truly makes a difference in the lives of folks with disabilities.”

On May 24, beginning at 6 p.m., VCIL will celebrate its 40th anniversary with a fund-raising gala at National Life in Montpelier. Tickets are on sale now for the event, which will include a number of guest speakers and an amazing keynote speaker: Judy Heumann, who is an internationally recognized leader in the disability rights community. Heumann is a lifelong advocate for the rights of disabled people. She contracted polio in 1949 in Brooklyn, N.Y. and began to experience discrimination at age 5 when she was denied the right to attend school because she was a “fire hazard.” Her parents played a strong role in fighting for her rights as a child. Heumann determined that she, working in collaboration with others, had to play an increasing advocacy role as she and others experienced discrimination because of their disabilities. One example of her work to stop discrimination was in the early 1970s when she sued the New York City Board of Education and became the school system’s first teacher in a wheelchair.

Heumann said, “Independent living is not doing things by yourself. It is being in control of how things are done.”

If you are interested in attending and/or sponsoring VCIL’s 40th anniversary gala, please contact Linda Meleady at lindam@vcil.org or 802-224-1819.