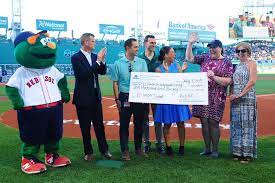 The Red Sox Foundation is honoring the Vermont Center for Independent Living for its dedication to social justice, diversity and inclusivity. At a home game tonight, July 9, against the Texas Rangers, there will be an on-field check presentation to VCIL Executive Director Sarah Launderville.

VCIL won the $10,000 first-place IMPACT Award, thanks to receiving the most online votes out of other Vermont nonprofits that were in the running.

“I was so touched and grateful when I received the phone call from the Red Sox Foundation official that I literally cried,” said VCIL Executive Director Sarah Launderville. “It means so much that Vermont’s favorite baseball team values what mission-driven organizations such as VCIL bring to the table. The grant will help us further our work promoting dignity, independence and civil rights of Vermonters with disabilities.”

Launderville is looking forward to bringing her 8-year-old son, Evan, to the game, along with two of her colleagues. The foursome will enjoy premium seats and a visit to the NESN broadcast booth, where Launderville will be interviewed. VCIL will also receive a custom Red Sox jersey, which will be imprinted with a “79” as a nod to the year the nonprofit was incorporated almost 40 years ago.

The second-place 2018 IMPACT Award in Vermont went to St. Johnsbury Academy and third place went to Brattleboro Time Trade. IMPACT Awards were given to organizations in all five states outside of Massachusetts.