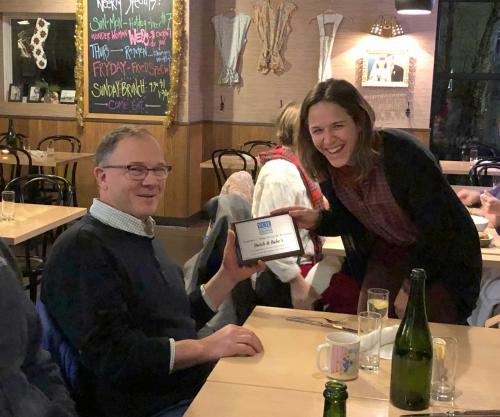 The Vermont Center for Independent Living, a statewide disability rights organization, recognized a Burlington restaurant on Nov. 29 for its commitment to accessibility. Butch & Babe’s owner Kortnee Bush received the Rosemary J. Miller Dining for All Award.

Cleary Buckley, a local architect who nominated the restaurant for the award, commented on the eatery’s accessible bar seating. “I especially think they did a great job creating a seated height bar that feels comfortable and welcoming to all — and not just a mandatory three-foot section like I see at so many other bars.”

Bush pointed out that sometimes people who do not have physical disabilities take access for granted. But she looks at bars and restaurants with an eye toward accessibility, in part because of a longtime customer who has crutches and eats at Butch & Babe’s two or three nights a week.

“It’s also just being part of the community. You want to be accessible to everyone in the community,” Bush said, adding that this encompasses everything from the menu to physical access.

The award is named for VCIL’s longtime receptionist, who retired in 2011. Miller, who was born with cerebral palsy, has never let her disability slow her down. She can often be seen out and about in central Vermont, whether she is eating out, shopping or advocating for disability rights.

VCIL Executive Director Sarah Launderville said, “With this award we honor Rosemary Miller, who was on the front lines of VCIL for over 30 years, and her love for our community and good food. I think of a time when it was legal to kick people out of restaurants simply because they had a disability. We’ve come a long way from that, but not all businesses take care in ensuring real inclusion. We are honored to give this award to Kortnee, who shares our vision of a world accessible to everyone.”

The Rosemary J. Miller Dining for All Award is given out annually, and more nominations will be solicited next year.